It all started with a shortage of collared shirts, a hat that was too small, and a laptop without a bag.

These were all dilemmas that inspired 4 entrepreneurial spirits on a handcrafted journey that would lead them to working together as friends, coworkers, and creative conspirators in a studio space on the 4th floor of 290 Albert Street.

Today that studio houses three independent businesses – Commonwealth, Oldhat, and Wilder Goods. Together in a large, open studio space, these business owners craft their products, sell their goods, and inspire each other to be better craftspeople – all while finding time to debate the latest podcast or issue and enjoy the sense of community among them.

Andrew Doerksen had always been intrigued by the idea of having a handmade craft. And with some limited sewing experience and a need for some new collared shirts, creating one himself was the obvious place to start. He assumed he would move on to make all sorts of items, before realizing that perfecting the art of this one classic item would become such a passion.

“I never really thought I’d land on collared shirts. I just needed some at the moment. I realized with my personality that I really like getting one thing and learning how to do it really well. And then I started figuring out all the things there were to know about the apparel industry and about sewing.”

Once he was set on collared shirts it didn’t take long for him to go from one $20 Kijiji sewing machine, to purchasing 5 industrial machines and continuing to hobby away in a storage room above Parlour Coffee, where he worked at the time. 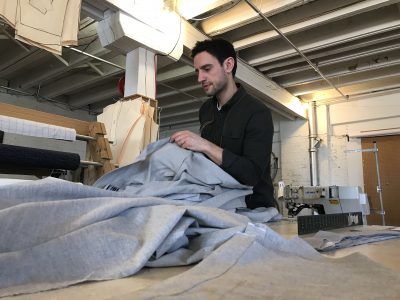 Things grew from there and he decided to join friends Brendon Friesen and Nathan Bezoplenko, of Wilder Goods, in their shared studio space at 290 Albert Street, where he continued to hone his craft and expand his business manufacturing simple, classic, and enduring garments.

Doerksen says part of what makes his shirts special is that it’s a different experience to know where your clothing comes from.

“It’s made in Winnipeg and owner-operated. I make the shirts and knowing the person who made your clothes is a real novelty. But it almost shouldn’t be. The way that most clothes are made most of the time, there’s no concept, there’s just so much unknown. You don’t know where it was made, you don’t know that much about the material, or the process.”

In contrast, you can walk in and watch Doerksen make his shirts, ask about the process, and be part of the experience. And he brings an attention to detail and quality that sets his shirts apart.

“The fabrics that I source are a big part of what makes my shirts special, I try to find things that are kind of basic and classic in style but also have some unique character to them and are really-well suited to the season and come from reputable mills. I try to take a detailed approach to the way things are made, as opposed to looking at the overall aesthetic of the garment. I’m curious about the details, like how was it made, what machine was it made on and what are the differences. As soon as you start paying attention to the little things you really notice them and now that I’m making them and drafting the patterns, I just instantly feel if something is off.”

Doerksen loves working in the shared studio space with like-minded makers and enjoys the opportunity to bounce ideas off his colleagues. He also enjoys being part of the Exchange District.

“I love it, I feel like this is a creative hub of the city. There’s a lot of makers here. People come here to find out about these makers on events like First Friday or any given Saturday you see people wandering the streets.”

In 2005 after being given a hat that didn’t fit, Nathan Dueck decided to take on a creative project. Using some fabric that was kicking around, his mom’s sewing machine, and an ice cream pail as stiffener in the peak, he created his first hat.

With just enough small-town country Home Ec training under his belt he was able to sew this initial project. But although sewing was something he developed over time, knowing how to put something together is a skill that’s second nature to Dueck.

“Something that’s always come naturally for me is understanding how things fit together. I didn’t know a lot about the techniques of sewing but I understood the shape of the hat and the patterns.”

He took this natural ability and ran with it, continuing to create hats and develop his craft. At first, he used almost exclusively old cotton or twill pants, moving on to carefully source second-hand and recycled fabrics for his products.

Although Dueck was busy tree-planting and attending university, where he was studying engineering, he continued to make hats and became a regular fixture on the Folk Festival scene.

“At that time, I was basically only selling at the Winnipeg Folk Festival,” he says. “So, I’d spend the first two months of summer making hats, sell at Folk Fest, and I pretty much put myself through university doing that.” 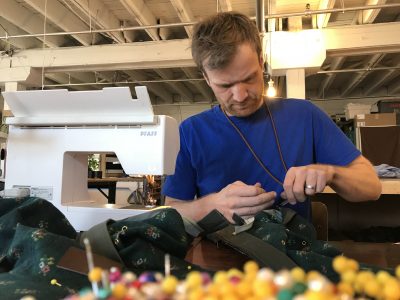 After finishing his degree, Dueck began working as an engineer. But it didn’t take long for him to give full-time hat-making a try.

“I always expected that making hats wouldn’t be full-time, but in the back of my mind I thought it would be fun to try it. I just thought maybe I’ll try it for a year and see how it goes.”

That was in 2015 and it’s still going. And although he doesn’t have the security he did in his engineering career, doing something he loves makes his entrepreneurial life worth the risk.

“I love it. I made a concession to know that I don’t have a guaranteed income. But my quality of life because I do something that I love is so much better.”

In 2017 Dueck joined friends in the studio space at 290 McDermot Ave, giving him the opportunity to work alongside other inspired crafters.

“The amount of times that we’ve passed ideas by each other, or even just colour combinations or thread choices or analysing someone else’s process as you walk by has been really really helpful,” he says.

And Dueck enjoys having his studio space in a creative hub like the Exchange District.

“It’s great. There’s so much awesome stuff going on in the Exchange. A lot of people come to the Exchange and pop into the unique shops. It’s a destination that people want to come to. Being part of what’s going on down here is exciting.”

Long time friends Brendon Friesen and Nathan Bezoplenko both grew up rural communities with do-it- yourself families. With an upbringing of working on cars and doing home renovations it was a natural fit for these two to start crafting.

It was Friesen who started the ball rolling when with his limited Home Ec sewing experience he decided to make a backpack for his laptop.

“I used my mom’s old Kenmore sewing machine to make it, so it wasn’t perfect, but it was fun and rewarding and that kinda started things,” he says.

From there him and Nathan just started making stuff for fun. 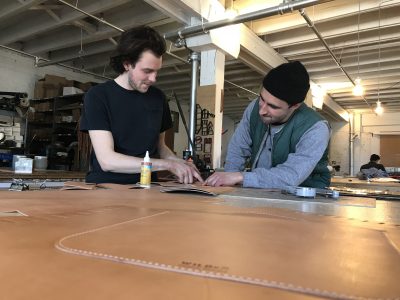 “We had a studio in 75 Albert, it was lent to us by the Exchange Community Church. They allowed us to use one of their studios as long as we kept the doors open, because they ran a drop-in program during the day. The first two years we just made stuff for fun in there.”

The two friends continued to craft creating leather and canvas goods – including bags, wallets, belts and more. After those first two years they got an opportunity when their friends opened Thom Bargen Coffee & Tea and invited Friesen and Bezoplenko to move their studio into the space.

“We weren’t a business yet, mainly a hobby shop, just making stuff for friends. This gave us a chance to step up our game and expand our business. This opportunity gave us some brand recognition and we made a lot of cool connections. And although coffee is totally different from what we make it was actually a really complimentary product.”

With their new digs in place they continued to grow their business designing and manufacturing leather and canvas goods – creating a product where the materials look beautiful and stand the test of time.

“We use all-natural materials like cotton canvases and twills, our hardware is all solid metals with solid copper rivets, solid brass hardware, natural vegetable tan leather. The aging process is really consistent across the board. The canvas will get a wash to it, the leather will get a nice dark patina, the hardware and the rivets will oxidize. So, they start out as one thing and then they morph together to be a really personalized thing.”

The pair eventually outgrew their space in Thom Bargen and moved into their current space at 290 Albert, alongside Commonwealth and Oldhat. Friesen says being around other creatives is something that has always appealed to him and his business partner.

“We love feeding off creativity in general. When working at the church we worked along Indigenous artists, and at Thom Bargen we worked along side people who cared about coffee craft, and now we are all in a similar industry so there’s a lot of cross-over with equipment and materials, and so now not only are we getting excited together but we can also learn from one and another in regards to equipment and process. And we are also all friends.”